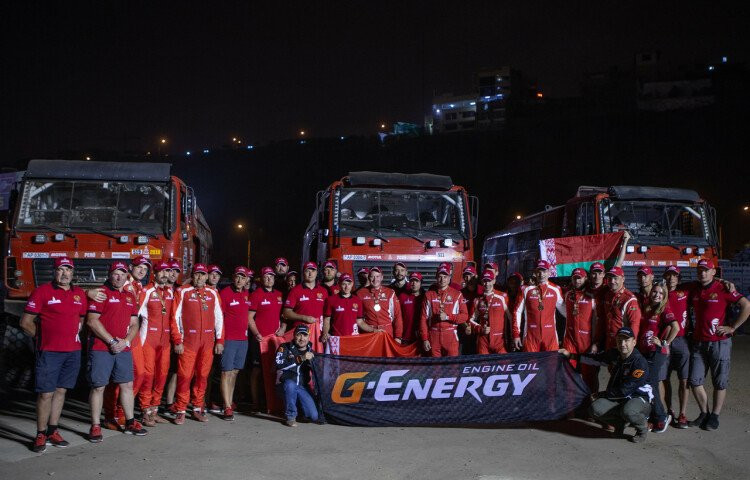 “MAZ-Sportavto” team has successfully completed “Dakar-2019”, the most difficult rally-marathon on the planet. The G-Energy and Gazpromneft oils used by the crews did an excellent job and went through the trial by Peru sands.

Dakar 2019 has once again confirmed the unspoken status of the “race for survival”. In terms of complexity, it surpassed the jubilee rally of the previous year. Although this time there were fewer stages, only 10, almost all of them were held on areas with treacherous dunes, quicksand “fesh-fesh”, in off-road conditions and on rocky areas where any mistake of the crew could turn into many hours of repairs. Many teams were lost in navigation and got stuck in sand funnels, even the most reliable equipment came to failure in work.

Trucks of Minsk automobile plant proved to be one of the most resilient in the conditions of “Dakar-2019”. All 3 starting trucks reached the finish line, two of them — the crew of Sergey Vyazovich and Alexander Vasilevsky-in the final standings were in top ten drivers.

Throughout the race, the engines of MAZ-Sportavto trucks were filled with G-Energy oils, and the new product, Gazpromneft Diesel Ultra, was used in technical support of the vehicles . The engineers of the company “Gazpromneft — lubricants” Company worked with the riders on the “Dakar”. They carried out tests of lubricants with the help of a mobile laboratory daily.

“Congratulations to the MAZ-Sportauto team on finishing one of the most difficult rally marathons. Only 14 trucks out of 41 that started the race covered the entire distance. And, what is very pleasant, three of them are from MAZ — Sportavto team, supported by "Gazpromneft — lubricants" Company. Throughout the entire distance, the machinery performed its tasks 100%. They were helped by innovative oils of our production, which were poured into the engines of "combat" trucks, as well as into technical support vehicles. This year we successfully tested a completely new product, Gazpromneft Diesel Ultra 10W-40, which has not yet entered mass production. The tests in Peru desert have shown that these oils perfectly cope with the heavy loads of the rally-marathon and even in extreme conditions of the desert perfectly protect the engine.”